About an ordinary life: Encyclopedia entries

Somebody recommended this idea as a cure for writers block.   Amy Krause Rosenthal wrote a neat little book titled Encyclopedia of an Ordinary Life.  The book flap states that she “ingeniously adapted the centuries-old format of the encyclopedia to convey the accumulated knowledge of her lifetime in a poignant, wise, often funny

, fully realized memoir. Using mostly short entries organized from A to Z.” It’s the kind of book you can leave lying about and dip into any time you need a laugh.

I wouldn’t quite refer to my blog slump as a “block” but I need a jumpstart so here are a few of my contributions to an encyclopedia of an ordinary life … for some reason,  I started with the letter “B”.

Just read a great piece about brain surgery… with accompanying lurid photographs and even video.  Surprising.  I was under the impression that the brain was an elusive thing that couldn’t be touched, even delicately, without causing great damage… BRAIN damage!  Not tr

ue.  The doctor in the piece goes jiggering around in there like he’s scooping out ice cream and making a sundae.

But what do we say if the complex task IS your son’s ALGEBRA homework… Then I’m stumped!

The magic of the BICYCLE is something I didn’t appreciate until I was well into my 30th decade (extra points to those of you who are surprised to learn that I am well past my 30th decade). 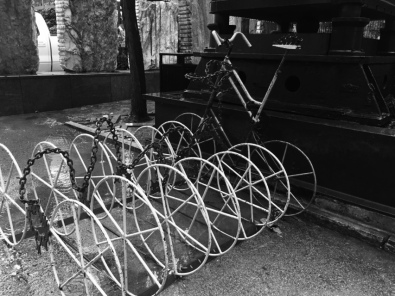 When I was 11 I had a bike and I rode it places… but I didn’t recognize how fortunate I was to have a bicycle. I would get on my bike and ride all around my neighborhood. I’d ride to my friends’ houses, to the park to play,  to the stores… I rode everywhere.  When you’re 11, you’re to be forgiven for not appreciating the fact that you don’t have to make car payments; you’ve never had to make car payments.  At 11, the fact that your bicycle frees you from car insurance, buying gas, looking for a parking spot, or getting stuck in traffic somehow eludes you.

For me, bicycling was love at first sight (sit?).  The minute I saddled up on the bike that I bought with my own money for my grown-up self, I was in love with the feeling of freedom and self-generated power it gave me.  The sublimity of observing life while walking has been described by poets from Wordsworth to Whitman, but for me, cycling offers the perfect speed at which to observe the world.