My COVID-19 Diary: What’s left to talk about?

I’m wondering, how many of you are running out of things to talk about during the coronavirus quarantine? It feels as though we are into week 72 of this thing by now. It’s hard to imagine there are shows on Netflix or Amazon that you haven’t already binge-watched. Our subscription TV game is very strong over here.  We came right out of the gate and watched several shows with subtitles that had multiple seasons. But when you start so strong, where do you go from there? After watching four seasons of Fauda, Tiger King is simply a huge disappointment. Nevertheless, my wife and I can spend several hours unpacking a single episode of the television shows we enjoy. During quarantine, hopefully, everyone is learning an art my mentor called, “saying a lot about a little.” 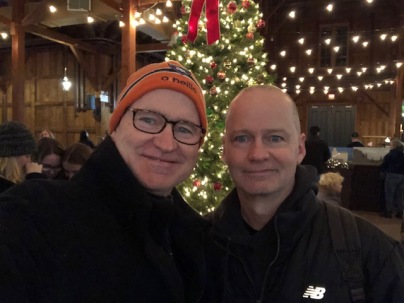 My brother Matt and I mastered the ability to do this long ago.  He and I are best friends.  Because we’re brothers and we share the same history, we either have nothing to talk about or we can spend hours chewing over the same funny stories from our youth, our parents, colorful people from “the neighborhood”, and a little bit of sports. We access the same media so we have a common set of reference points.  In fact, when I realized a couple of years ago that he didn’t read the New Yorker, I had to get him a subscription so he’d read the same urbane articles about global warming and Harvey Weinstein that I consumed and we’d have more things to talk about.

Because we consume the same media,  Matt and I begin many conversations, “Don’t ruin it for me, I didn’t _____ “ (fill in the blank: “read the article”, “watch the game”, “see the movie”).  In Matt’s defense, he is fantastic at this. He has the ability to quickly pivot to some other subject that we have discussed perhaps a million times before, never running out of fuel to keep the conversation going, possibly the Giants v. Minnesota playoff game in the winter of 2000 and the guy we talked to in the parking lot at Metlife Stadium that day. Me, not so much.  More than a few times, just by arching an eyebrow,  I’ve ruined English soccer matches he recorded and spent the entire weekend looking forward to watching.

With all of us living in quarantine, I suspect you’re all making these adjustments in your communication patterns. What are you doing to fill the conversational void created by the absence of most human contact? Because it’s a thing.  I promise this story is going to meander back to the Sunday Routine.  Meanwhile, shouldn’t you be washing your hands? Get on that!